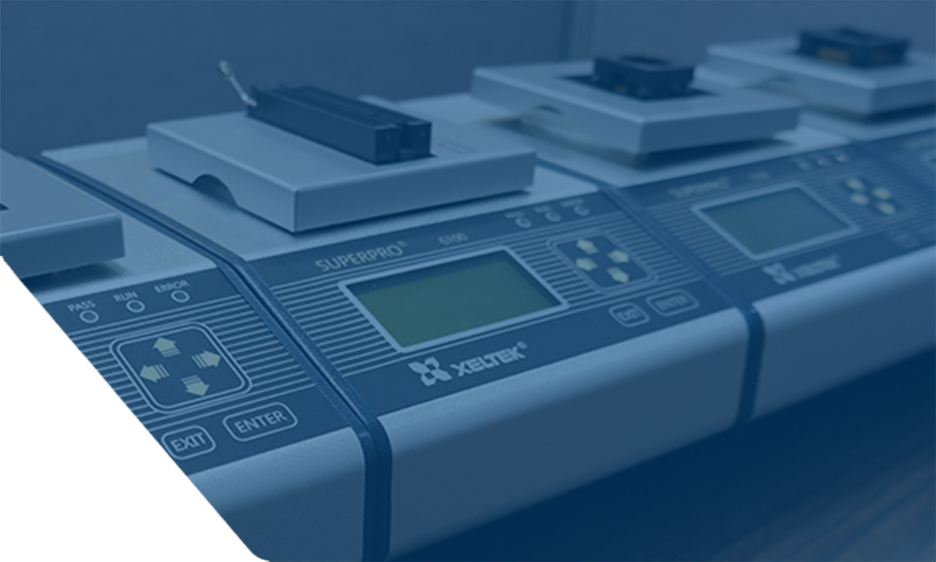 Many of today's complex ICs come in large pin-count packages. A 68 pin programmer requires specialized (non-universal) socket adapters to be used in order to support larger than 68 pin devices. Unused or unrelated pin connections are removed in order to be able to fit within 68 pin sockets of the programmer.

On the other hand, SuperPro6100 models are equipped with 144 pins. There is only one QFP64 or QFP100 socket adapter needed. Each adapter is fully universal for all IC devices of the same package type. So, one Xeltek QFP64 adapter does the job of 70+ Elnec QFP64 adapters (or one adapter plus 70+ pin-conversion PCBs)!

A user of BeeProg3 programmer will have to come back and order more parts frequently. In combination with additional costs and shipping charges, time wasted to order a new part and waiting for it could amount to substantial additional cost and time lost. Also, whenever there is a new QFP64 device that comes out in the market, chances are that a new adapter (or a conversion PCB) has to be designed. Who has time to waste when a product development cycle time is ever shortening in today's market?

Another important issue is of the reliability of the socket adapter. We have found out in the past that contact problems tend to crop up here and there in the course of adapter usage. The problem gets more frequent when the socket adapter is subject to frequent insertions. So, in order to minimize the adapter contact problem, Xeltek introduced new DX series 144 pin adapters, which employs industrial grade high-quality socket connectors. While common socket adapters use 2 layers (top and bottom) of PCBs interconnected together, DX adapters have a single layer of PCB. Combined, they improve the overall reliability required for demanding engineering and industrial applications.

In summary, Xeltek SuperPro model programmers and socket adapters are designed and built for Engineering and Industrial applications, which demands high performance and reliability.

SuperPro6100 programmers come with dual operation modes: PC connected and Stand-alone. During the development cycle, PC mode is used. When volume programming is required, Stand- alone mode is recommended. In order to operate in Stand-alone mode, a device project file is created first. Project file consists of the device programming algorithm, data to be programmed, etc. The file is stored onto a Compact Flash (CF) card, which is plugged into the back of the programmer unit. At this point, the programmer can be detached from the PC and operated stand- alone via the keyboard and display on the programmer.

Advantages of operating in Stand-alone mode are as follows:

A user of Xeltek SuperPro programmers will experience easy to use and reliably operating programmer, fast device update service, expedient technical support, long lasting, and easy setup for Engineering or volume production environment. Be aware of hidden cost of other low-cost setup.