We Support Old PAL and GAL Device Programming Too

Programmable Array Logic (PAL) was introduced by Monolithic Memories (MMI) and GAL (Generic Array Logic) was introduced by Lattice Semiconductor. These chips were popularly used in 1980s and 1990s and are still in use with older electronic designs. PAL devices are OTP (one time programmable chips) and they are programmed using JEDEC/hex files. On the other hand, GAL devices are reprogrammable based on EEPROM technology. The generic design of GAL devices is able to emulate a wide variety of PAL, EPLD and PEEL devices. Therefore GAL devices are direct replacements for most PLD device architectures.

Currently SuperPro 6100 programmers support more then 600 PAL and GAL ICs from major former makers such as AMD, Lattice Semiconductor, Cypress, National Semiconductor, Texas Instruments. Some GALs (IspGALxx chips) can be programmed in-circuit and supported using the in-system programmer, Superpro IS01 Some of the popular PAL and GAL devices supported are listed below. 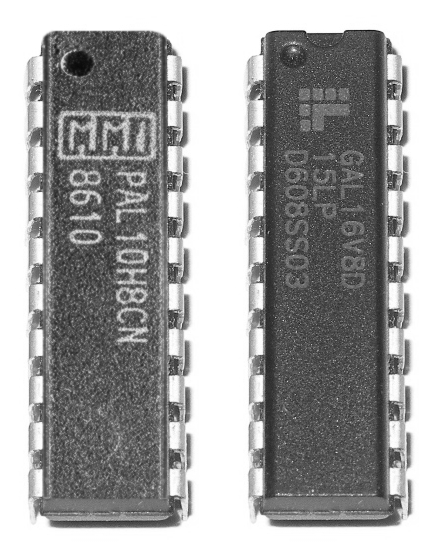 For further assistance in PAL and GAL programming,