Xeltek ISP programmers such as SuperPro IS01 and SuperPro IS03 are a multi-function, high-speed professional ISP programmers which can be used to program parallel NOR / NAND chips in-circuit. The following two methods of NAND/NOR ISP programming are discussed in detail with their advantages and limitations:

SuperPro IS03 in-circuit gang programmer can be used for programming NAND / NOR flash chips that are already soldered on the PCB. This is called direct parallel programming of parallel chips; up to 50 I/Os may be needed in this case. Data / Address / Control Bus are connected to ISP lines. ISP lines reset the CPU connected to the FLASH chip by activating the RESET pin of the CPU. This way, very high in-circuit programming speed can be achieved as data is transferred in parallel mode. Moreover, up to 4 parallel chips can be programmed using SuperPro IS03. This method is not applicable if nail access (all pin access) is not available. In such cases, non-intrusive ISP methods can be used and is discussed below. 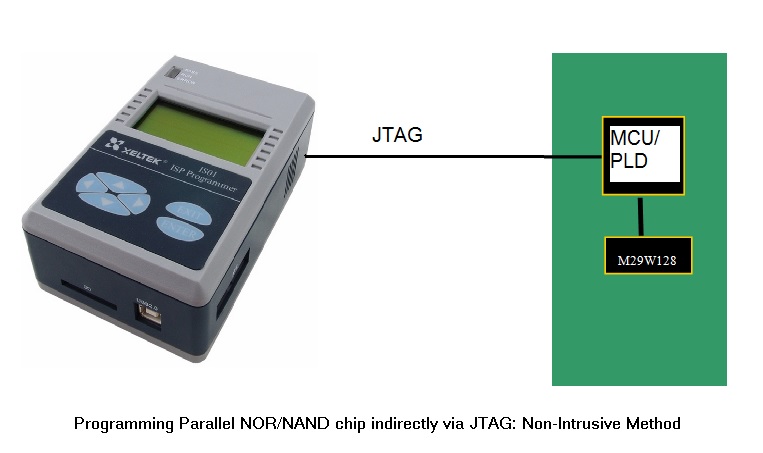 Indirect programming of parallel NOR / NAND flash memories is possible if the flash memories are connected to a JTAG-compliant device (CPU/FPGA/CPLD).