FRAM has fast write times which are approximately 1000x faster than EEPROM. The two steps required to write data in an EEPROM -write followed by read / verify command - are combined into a single step in FRAM memories.

Very little current is needed to change the FRAM data and writes to the FRAM cell is achieved at voltages as low as 1.5v. Low voltage result in less power usage.

FRAM exceeds EEPROM write cycles at 100 trillion read/write cycles or greater. Also, partial write of data known as data-tearing is eliminated because all necessary power for FRAM is front-loaded at the beginning of data write.

FRAM memory chips are used in many applications, but they are typically found in electronic devices for storing small amounts of non-volatile data. FRAMs serial interfaces are also common in many electronic devices. Due to memory retention limitation under high temperature, it is recommended that programming is performed post reflow / hand soldering*. 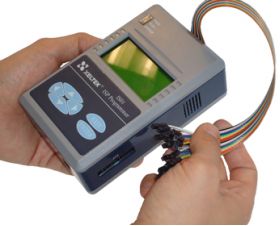