SuperPro IS01 is a single channel programmer, in order to meet the requirements of 20 seconds, a number of SuperPro IS01 programmers are needed. Therefore, the use of four SuperPro IS01s, each connected to a 4-channel switch board is needed for programming 16 chips. Full board programmer takes less than 12 seconds.

SuperPro IS03 includes a 16-channel simultaneous programming feature, so you can use 1 station IS03, no channel switching board is needed in this case. 16 PCB panel programming can be done in less then 4 seconds. 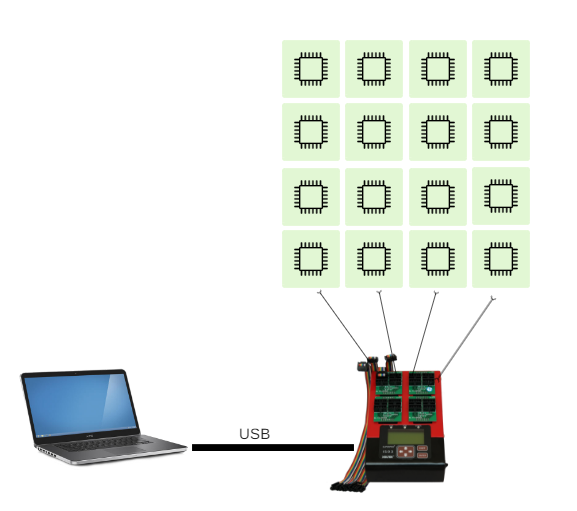 SuperPro IS01 is generally more suitable to program 4 or less chips at same time as user can use 4 each IS01 concurrently. Use of demultiplexing solution may increase programming time and is not recommended in production programming of panels with 16 or more PCBs.

Superpro IS03 can burn up to 16 PCBs at same time, and multiple IS03s can be used to program larger panels of 32 PCBs or more. Programming time can be greatly reduced using Superpro IS03 and thus increasing throughput.