Communication product with target PCB consisting of a Broadcom CPU BCM1103, CPU connected to a NOR FLASH chip M29W128GL. User wants to frequently update M29W128GL code, such as repair and board firmware upgrades. Solutions that required desoldering the chip , re-program and solder back to PCB are very less efficient and prone to damage PCB. Now we hope to complete this work by the CPU's JTAG port (in circuit programming).

Difficulties of this project lie in the BroadCom CPU platform and how to control the NOR FLASH.

IS01 includes a JTAG interface, so there is no hardware problem. Instructions of reading and writing NOR flash can be provided to CPU along with data to be programmed using JTAG interface. This method enables user to program a parallel NOR flash using JTAG serial interface of SUperpro IS01 programmer. 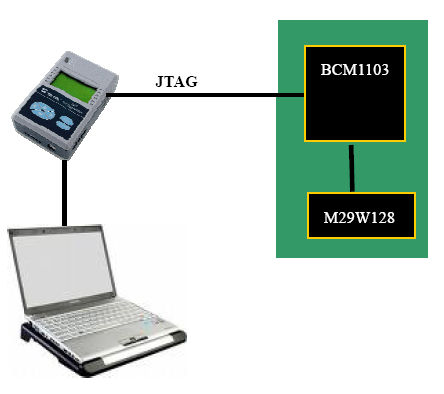 Indirect programming of parallel NOR / NAND flash memories is possible if the flash memories are connected to a JTAG-compliant device (CPU/FPGA/CPLD). Programmer communicates to the CPU using JTAG protocol and CPU on the PCB programs the target NOR flash using JTAG interface.