Serial EEPROMs are suitable when a less amount of nonvolatile, read/write memory is needed in a design. These are small and inexpensive which are extremely useful when a minimum number of I/Os are used. There are different kinds of serial EEPROM devices which can be categorized on the basis of communication protocol they use for ISP programming.

In this article, we will discuss EEPROM programming through I²C interface using ISP programmers such as Xeltek IS01.

The 24C04serial EEPROM supports the I2C protocol. This protocol defines any device that sends data ontothe bus as a transmitter and any device that reads the data as a receiver. The device that controls thedata transfer is known as the master and the other as the slave. The master will always initiate a datatransfer and will provide the serial clock for synchronization. The 24/25x04 are always slavedevices in all communications.

In order to program any serial EEPROM in-circuit, the PCB has to be designed to be able to program serially. The following points should be kept in mind:

Let us take an example of M24C04 chip from Microchip in order to understand the connection with ISP cable of Xeltek Superpro IS01. The following is the pin out of M24C04 chip:

Front view of color coded ISP connector of Superpro IS01: 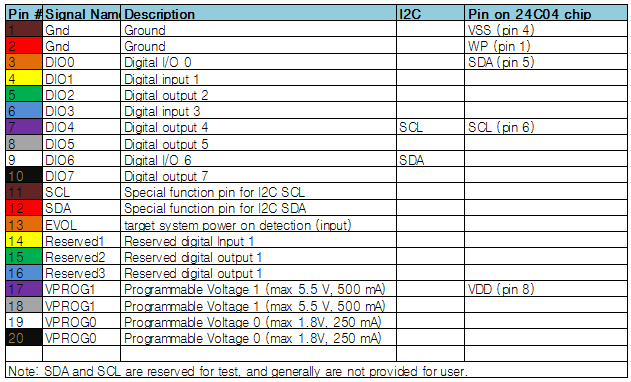 The programming operation steps are as follows:

1. Search for the type of the chip to be operated in the ISP programming software and view the Device information dialogue box.

2. Connect the signal lines (including GND) for the corresponding interfaces of the ISP programmer with the target board.

3. If the above “mass production" function is to be used, TPIN and TPOUT signal lines should also be connected.

5. The independent power supplier of the target board switches on the power.